History of the monument

The château of Talcy, 25 km from Blois, features sharp, pointed rooftops that rise distinctively from the wheat fields of Beauce. Visit this 16th-century château – a property much-loved by poets – and explore a unique interior complete with original furniture from the 18th century, along with its conservatory orchard. 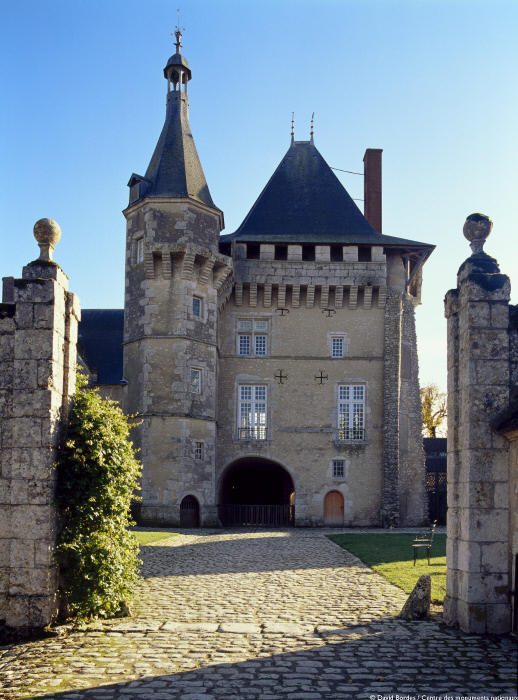 Talcy, “a house of such human beauty that everyone dreams of living there” (Houlet)

Records of the Talcy estate date back to the 13th century, but the current château is the result of modification work commissioned by Bernard Salviati, the Florence-based banker who took ownership of the property on November 8th, 1517. Although this former manor house and farm was built around the same time as the château of Chambord and other major Renaissance châteaux, it retains the appearance of a late Middle-Age building. The main façade features a large, square tower above the entrance porch, two tall hexagonal towers topped with machicolations, and a covered wall walk. The buildings, forming two perpendicular wings, open out onto the main courtyard, which features an attractive well with columns. The outer courtyard features a press room and one of the region’s most remarkable dovecotes, with some 1,500 holes.

The wood-panelled apartments are remarkably well preserved and house a collection of 18th-century furniture created by famous Parisian cabinetmakers, an extremely rare painted canvas with Indian decorative features set in the wood panelling of the dining room, and tapestries. This particular area of the property, a listed Historic Monument, stands testament to the luxurious lifestyle of the Age of Enlightenment and is one of the most interesting features of the château.

With around 7 hectares of wall-enclosed gardens, with views across crop fields, the estate provides a reminder of its former role in farming and food production. Visitors can take a stroll along a footpath through the magical, picturesque vegetable garden, which is home to a variety of species throughout the seasons. Since 1997, the gardens at Talcy have included a conservatory orchard housing a variety of fruit species and varieties (both natural and espalier trained). The outdoor spaces are embellished with large flower beds.

A château beloved of poets

Pierre de Ronsard composed 182 sonnets for Cassandre Salviati. These sonnets form “Les amours de Cassandre” in the first of his Les Amours books. The most famous of all is the sonnet that begins “Mignonne, allons voir si la rose...“.

Diane, her niece, was the muse of the young Agrippa d'Aubigné. Poet Alfred de Musset is a direct descendant of Cassandre’s daughter. One of the first 19th-century owners, Albert Stapfer, was the first translator of German poet Goethe, including his most famous work Faust. The first edition of his translation was illustrated by artist Delacroix.

The “conference of Talcy” took place at the château in 1562, during the Wars of Religion. It was the last time that leading figures from both sides of the conflict came together. The “Catherine de Medici” and “Charles IX” rooms stand testament to this event.

By pursuing your navigation(browsing) on this site, you accept the use of cookies.